Lublin is located in southern-eastern part of Poland, on the Lubelska Upland, over the Bystrzyca River. It is said that Lublin is a capitol of eastern Poland and definitely the main city in its voivodship. Lublin is an academic town with lots of students living here. It’s also one of the oldest cities in Poland. Lublin plays a role as railway junction of Poland and an industrial center within the region.

There are about 15 public and private universities in Lublin: 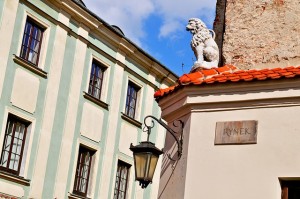 Lublin has a wonderful old town.

Lublin was established in the 6th century and it’s one the oldest habitat area in Poland. However, the beginning of Lublin urban civilization starts in 11th century. In the 12th and 13th century, due to geographical location at eastern borders of Poland Kingdom, Lublin became strategically important as a military and political center. Lublin is historically famous for Lublin Union – the Polish-Lithuanin pact signed here in 1569. Also in 1918 the city was announced as a capital of (back then) new born Poland. The title didn’t last long – it remained capital only for few days. Important fact in Lublin history, as it is considered to be a catholic city, was Pope John Paul II visit in 1987.

Because of close cultural and political contacts with Ukraine and Belarus (neighbor countries) – Lublin is a multicultural city. Also as a student town – it offers a lot of high standard cultural entertainment, especially different kinds of festivals. Lublin ran in European Capital of Culture 2016 contest, it didn’t win, but made it in the finals. City claim is „Lublin. City of Inspiration”. 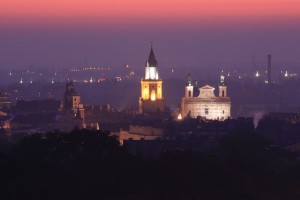 View on old town by night.

Majdanek State Museum – former German concentration camp in Lublin. In Majdanek ashes of cremated victims who were killed in mass executions are being held. Visitors may pay tribute to Jews killed here during World War II.

The Castle of Lublin – The Lublin Province Museum – medieval castle located in the Old Town of Lublin. It is consider to be one of the oldest royal residents which are preserved in Poland.

The Lubomirski Palace – completed in 16th century, then renovated in 17th century by Lubomirski family in a Baroque architecture style.

Cracow Gate – original gate from 14th century considered to be a historical symbol of Lublin. Representative of Gothic style, but also ornamented in Baroque characteristics.

All of Lublin universities has their own dormitories, pleas contact with schools authorities to know more about accommodation conditions and costs. Besides that, Lublin has an independent accommodation resources –hotels and hostels, which prices are different depend on localization and standard. You can also rent a room or a flat in here.

Public transport in Lublin city consists of buses and trolleys. There are few kinds of tickets – regular one (single-fair in one bus and one route or 30 minutes ride in every buses that you need; it cost is about 2,40 PLN), Lublin city also provides tickets that works for 12 hours, 24 hours, and 72 hours since validation, and those that works for 30 days, 90 days, and 150 days. Tickets are available to purchase in kiosks (news stands) and at vending machines. Students under 26 (with document that they are students) can buy tickets for half the price.