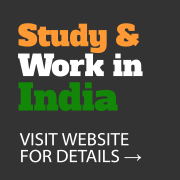 Wroclaw is located in south-western Poland on the southern part of river Oder (Polish name: Odra), in its history the city has been part of Poland, Bohemia, the Austrian Empire, Prussia and Germany. In 1945, as a result of border changes after II World War, it finally became part of Poland. In the past, two major trade trails crossed in Wroclaw – Via Regia (from Spain to Russia) and famous Amber Trade Route. Wroclaw is known as a town of bridges – the Oder River turn many times all over the city here. There are over 130 bridges and gangways in Wroclaw. The city is going to be European Capital of Culture in 2016. 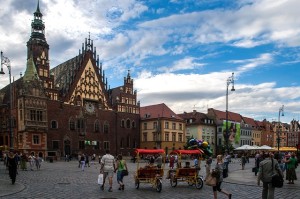 An old town of Wrocław.

Study in Wroclaw in one of 27 public and private universities. The most popular of them are: 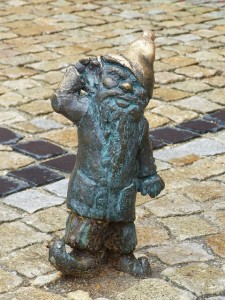 You can spot sculptures of dwarfes all around the city.

In the beginning of its history – at the end of 10th century – Wroclaw was named Vratislavia. As two major trade trails (Via Regia and Amber Trade Route) crossed in here, the city became center of trade and commerce. In 1163 Wroclaw becomes the capital of Silesia district. At the end of the 13th century Wroclaw

joined the Hanseatic League. Ages later – at the end of II World War, the Germans declare Wroclaw a fortress, and fight against the Soviet forces for almost 90 days. When the Red Army crossed the Odra river – on the 7th of May 1945 – after almost three months siege – the city surrendered. After the war – The Treaty of Potsdam in 1945 gave Wroclaw back to Poland.

Wroclaw is the one of the biggest cultural center in Poland. There’s an impressive number of theaters, museums, cinemas and art galleries in the city. Wroclawis famous from international movie and music festivals. As an academic city it also offers a giant number of clubs and bars. In next year – 2016 – Wroclaw is going to be European Capital of Culture. 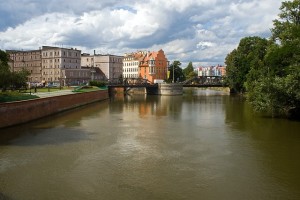 Wroclaw is famous for it’s canals.

Panorama of the Battle of Raclawice – a painting showing the battle at Raclawice led by Tadeusz Kościuszko. This painting is 114 meters long and 15 meters high. The work on painting such giant picture lasted ten months, this piece of art was created by five painters.

Four Denominations District – also known as The Four Temples District – a special place established for meetings and dialogue between faiths. Within a distance of not more than 300 meters, there are: Orthodox Cathedral of the Birth of the Most Holy Mother of God, St Anthony of Padua Church – Roman Catholic temple, the White Stork Synagogue and the Protestant-Augsbourg Divine Providence Church.

Slodowa Island – a little Island located near to Old Town is often a host of cultural events.

Humanitarian – Gardens of Experiences – educational amusement par located at the area of the Campus of Wroclaw Research Center EIT+.

The Royal Palace – situated in the southern part of Wroclaw Old Town. It was build in 18th century. Currently it plays a role of History Museum – an exhibition center presenting Wroclaw history. 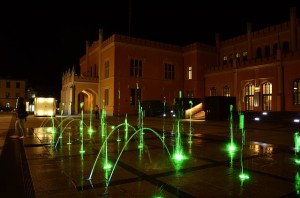 All of Wroclaw universities has their own dormitories, please contact with schools authorities to know more about accommodation conditions and costs. Besides that, Wroclaw has an independent accommodation resources – a number of hotels and hostels, which prices are different depend on localization and standard. You can also rent a room or a flat in here.

Public transport in Wroclaw is provided by buses and trams. There are over 60 bus lines and over 20 tram lines in the city. Wroclaw offers different type of tickets – single-ride and a season ones. Cost of Wroclaw bus and trams tickets are between 1,50 and 23 PLN. You can buy them in vending machines located near stops.

Students under 26 (with document that they are students) can buy tickets for half the price.