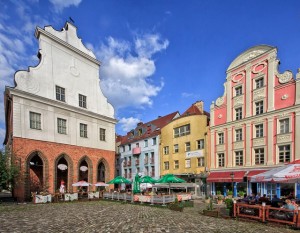 Szczecin is the capital city of the West Pomeranian Voivodeship in Poland. In the vicinity of the Baltic Sea, it is the country’s seventh-largest city and a major seaport in Poland. Szczecin is located on the Oder River, south of the Szczecin Lagoon and the Bay of Pomerania. The city is situated along the southwestern shore of Dąbie Lake, on both sides of the Oder and on several large islands between the western and eastern branches of the river. Szczecin is a center of Szczecin agglomeration and borders directly with the town of Police.

Apart from being a traditional junction of main European routes, Szczecin is considered to be a crucial seaport, closely connected with the nearby Swinoujscie port and a large shipbuilding centre. While Szczecin attracts mostly business travellers, it can also form an interesting tourist destination. Several enchanting sights, the many parks, and the impressive number of bars are Szczecin’s main attractions.

You can study in Szczecin and learn alot about culture of Poland while enjoying fantastic ambience it has. Its architecture is often compared with Paris, as the heart of the city is a star-shaped square, with diverging avenues. There is another reason for making the comparison with Paris – Baron G.E. Haussmann, who created a town-planning project for the French capital, also designed Szczecin.

There are about 17 public and private universities available in Szczecin. The most important are:

The city’s history began in the 8th-century with a Slavic Pomeranian stronghold, built at the site of today’s castle. In the 12th century, when Szczecin had become one of Pomerania’s main urban centres, it lost its independence to Piast Poland, Saxony, the Holy Roman Empire and Denmark. At the same time, the Griffin dynasty established themselves as local rulers, the population was converted to Christianity, and German settlers arrived. The native Slavic population was assimilated and sometimes discriminated against in the following centuries. Between 1237 and 1243, the town was built anew, granted vast autonomy rights, and eventually joined the Hanseatic League.

After the Treaty of Stettin in 1630, the town came under Swedish control. It was fortified and remained a Swedish fortress until 1720, when it was acquired by the Kingdom of Prussia and became capital of the Province of Pomerania, which after 1870 was part of the German Empire. In the late 19th century, Stettin became an industrial town, and vastly increased in size and population, serving as a major port for Berlin. During the Nazi era, opposition groups and minorities were persecuted and treated as enemies. At the end of World War II Stettin’s status was in doubt, and the Soviet occupation authorities at first appointed officials from the city’s almost entirely German pre-war population. In July 1945, however, Polish authorities were permitted to take power. Stettin was renamed Szczecin and became part of the People’s Republic of Poland, and from 1989 the Republic of Poland.

After the flight and expulsion of the German population and Polish settlement, Szczecin became the administrative and industrial center of Polish Western Pomerania, the site of the University of Szczecin and Szczecin University of Technology, and the see of the Roman Catholic Archdiocese of Szczecin-Kamień.

Most important places to visit: